Reality TV crossover! Every now and then, a season from TLC’s 90 Day Fiancé franchise teases at least one story line that seemed to belong on MTV’s Catfish, but fans were in for a treat with two on 90 Day Fiancé: Before the 90 Days season 4.

David, who is from Las Vegas, joined the show in the hopes of finally meeting his online girlfriend, Lana from Ukraine. He revealed they had been talking to each other online for seven years via the Eastern European dating app, Anastasia Date.

Over the course of their relationship, David estimated he spent about 5,000 hours talking to Lana, which would have cost him “over $100,000” because he had to pay a fee for each message he sent Lana on the site, and he also paid a fee per minute during live chats. David also revealed he had previously tried to meet Lana in person three times, but she stood him up. 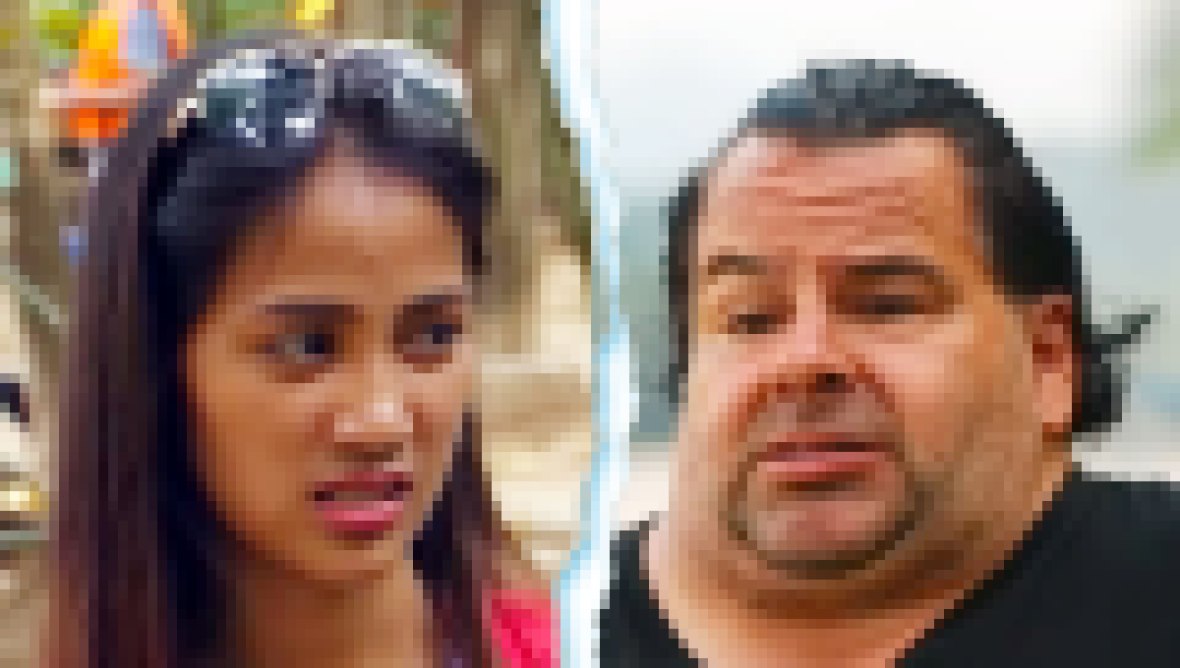 Find Out Which Couples From ’90 Day Fiance: Before the 90 Days’ Season 4 Are Still Together

“The first time, she did stand me up. Second time, her brother died. Third time, she had a medical issue. She had to go have surgery and it put her out of commission for three weeks,” David said about her reasons for not showing up.

Lana showed all signs of a catfish — the same ones stars Nev Schulman and Max Joseph established on their show as hints someone is pretending to be someone they’re not on the internet. She refused to video chat with David and she came up with excuses as to why they could not meet in person. Despite the doubts, David documented his fourth and fifth trips to attempt to meet Lana in person on season 4.

Meanwhile, David wasn’t the only Las Vegas resident who was potentially being catfished on the show. Yolanda planned to document the first time meeting her online boyfriend, Williams. She was smitten with the British hunk and revealed they met via Instagram when he slid into her DMs. Yolanda was widowed, and her online relationship with Williams was her first time stepping back into the dating pool after her husband’s death. 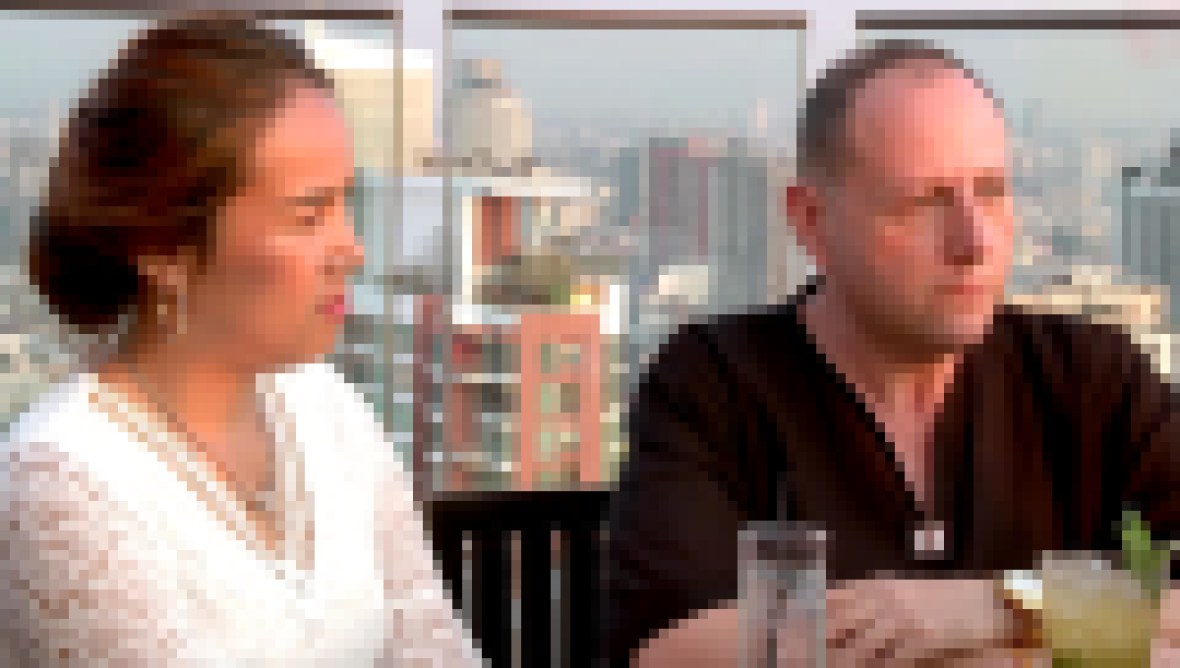 Fan of the Franchise? Secrets About ‘90 Day Fiance’ That’ll Make You Feel a Little Betrayed

But Williams showed several signs hinting he was a catfish. He also refused to FaceTime or video chat with Yolanda, claiming the camera on his smartphone was broken. He also claimed to be British, but when he would chat with Yolanda on the phone, his accent sounded more Nigerian. The biggest red flag was when he asked Yolanda for money to book a flight to visit her in America. Yolanda didn’t feel comfortable sending him money, so they agreed she would book a flight to England to visit him instead. When she asked him which airport she should fly into, Williams gave her the name of an airport that did not exist.

Keep scrolling below to find out which 90 Day Fiancé catfish story lines turned out to be true!

The couple appeared on season 2 of 90 Day Fiancé. Most story lines for the flagship series don’t include catfish teasers because in order for the K-1 visa to be approved, couples have to submit photos of themselves together proving their relationship is real. But during her intro, the Camp Hill, Pennsylvania resident revealed the Lagos, Nigeria native did catfish her when they first met online in a group for plus size women.

“At that time, he told me he was a Nigerian prince. He also told me he was living in Alabama, he had a son and that his son’s mother had passed away. Then I started to feel a little suspicious so I went into Inspector Gadget mode and found some really big lies. I found out that he had another social media profile. Then I see a picture of a woman with his son, this was his son’s mother very much alive. I reached out to her and she told me Lowo was in Vietnam studying business. And that is when I realized that I’ve been catfished,” Kyia said in her confessional.

But the couple was able to move past his lies. They tied the knot by the end of their season and they are still together.

Cortney made her debut on 90 Day Fiancé: Before the 90 Days season 1. The  Orlando, Florida native revealed she had been backpacking across Europe and she was in Madrid, Spain when she matched with Antonio on a dating app. But they didn’t have a chance to meet in person before Cortney returned to the United States. After she left Madrid, they continued to have a relationship online. Cortney documented her trip back to Madrid to meet Antonio in person for the first time.

The blonde beauty admitted she had been catfished by someone else before, and red flags were raised when she said she and Antonio had never talked via Skype, FaceTime, or any other type of video chat. Her parents were particularly concerned that Antonio wasn’t real, especially because his photos on social media were mostly professional modeling shots.

But Antonio did end up being the person he portrayed himself to be online. Unfortunately, he and Cortney did not have a strong connection in person and they split in 2018.

Ricky and Melissa joined the cast on 90 Day Fiancé: Before the 90 Days season 2. The Columbus, Ohio native was head over heels for his Colombian girlfriend. They met on a dating app and he planned a trip to her native country so they could meet in person for the first time.

But Ricky’s friends were wary about whether Melissa was real or not, especially after Ricky revealed some red flags about their relationship. He said he had been sending Melissa money every week even though she told him she works as a nurse, and Melissa would not respond to his FaceTime or Skype calls.

It looked like Melissa would turn out to be a catfish once Ricky arrived in Colombia. They had originally agreed to meet at a restaurant for their first date, and she kept Ricky waiting for hours and hours. Finally, she showed up.

But their relationship was short-lived and Melissa ghosted Ricky after their first date. He moved on with another woman he met on a dating app, Ximena, but that relationship did not work out either.

Jenny and Sumit appeared on season 1 of 90 Day Fiancé: The Other Way. Even though they had already met in person before joining the show, Jenny admitted Sumit catfished her early on in their relationship.

“One day I was on Facebook and I got a friend request from a Michael Jones. He looked like an English man, dark hair, very tall and thin. Michael was attractive. I think he was about 25 years old. Once I accepted his friend request, we did start messaging right away. He just seemed kind of silly and fun. He seemed like he just wanted to make me laugh. That’s the most important thing, a man that can make me laugh,” Jenny said in her confessional. “I was skeptical, like why was he choosing me? Especially when he’s half my age. But I just went along with him. All this time I was talking to Michael, even though I was falling in love with him, he had a secret.”

Jenny told her daughter she was being catfished by Sumit who was pretending to be Michael. When Sumit realized his feelings for Jenny were real, he felt guilty and decided to confess to her and reveal his true identity as a 30-something-year-old man from India. Jenny said she cried when she found out, but she later decided to forgive him because she had feelings for him, too.

That was just one of the snags the couple has hit in their relationship. Jenny left everything behind in America to move to India to be with Sumit, but she found out later in the season that he had been keeping another huge secret from her — he was married. He insisted he did not love his wife and that their union was an arranged marriage set up by his parents. Sumit vowed he would divorce his wife to be with Jenny.

The couple is still together and is continuing to document their journey on season 2.

The couple was first introduced to fans on season 3 of the spinoff, 90 Day Fiancé: Before the 90 Days. Rebecca and Zied met online, and even though they both were exactly who they portrayed to be on social media, fans felt Rebecca “catfished” Zied by sending him heavily filtered and edited photos of herself.

Rebecca admitted she was worried about meeting Zied in person for the first time because she looked different in her Instagram selfies than she does in person. She didn’t have to worry because once the Tunisia native saw her in person, he said he thought she looked even better IRL.

It seems like these two are the real deal because they are still together. Zied’s K-1 visa was approved and he and Rebecca tied the knot in April 2020. The couple now lives together in Georgia.

They also appeared on season 3 of 90 Day Fiancé: Before the 90 Days. Maria showed many signs of being a catfish: she did not want to video chat with Caesar, he had been sending her money and they also had several failed meeting attempts in the past after five years of dating online.

In May 2020, Caesar revealed he ended up meeting Maria in person for the first time in Ukraine after cameras stopped rolling but they didn’t have the same chemistry offline. “She was nice. She gave me hugs,” he said. “She would hold my arm while we were walking, but that’s it. Now we’re over.”

Even though it was pretty much clear that Williams was a catfish, it was confirmed after Yolanda’s children conducted a reverse image search (as seen on previous episodes of Catfish) to determine whether Williams was using his own photos. The search results revealed Williams was using stock photos of fit men outdoors as his Instagram photos, therefore proving he was not who he portrayed himself to be online.

Yolanda still seemed willing to forgive Williams for lying about his identity, so her daughter hired a private investigator who further proved he was posing as a romance scammer. During the tell-all, Yolanda admitted she was still in love with Williams and would be open to talking to him if he reached out to her again in the future.

Despite all of the warning signs, Lana was 100 percent real and exactly who she said she was. The couple met in person finally in Kyiv on David’s fifth trip to Eastern Europe, and they enjoyed several dates together.

David proposed to Lana right before heading back to the United States, and she said yes. They hoped to begin the process for her K-1 visa, but by the time the couple returned for the tell-all, they had already broken up.