He’s been doing this for a long time. Duane “Dog” Chapman may be more commonly known to the public as Dog the Bounty Hunter, but he actually got into the career long before he ever had a TV show of the same name.

On June 18, 2003, Duane made international headlines when he captured Andrew Luster in Puerto Vallarta, Mexico, with the help of his son Leland Chapman and friend Tim Chapman. But his interest in the bounty hunting world actually started before that.

It may have all begun when the reality star served 18 months at Texas State Penitentiary in Huntsville, Texas. In a 2007 interview with Fox News, he claimed he tackled an inmate about to be shot for trying to escape while he was incarcerated and was congratulated by a corrections officer, which inspired him to become a bounty hunter. “As the guard walked up when I was on top of the inmate apprehending him, and he threw down the handcuffs and said, ‘Hook him up, bounty hunter,'” Duane said. “That is what started the career.”

He’s come a long way since then. Duane appeared in several TV specials over the years, and in August 2004, the first version of Dog the Bounty Hunter debuted. It ran for eight seasons but was canceled in 2012. However, Dog and Beth: On the Hunt premiered on April 21, 2013, and featured the love of Duane’s life — his beloved wife, Beth Chapman.

Finally, a third spinoff entitled Dog’s Most Wanted on WGN America premiered in September 2019. It showed Duane doing what he does best — bounty hunting — while also dealing with his wife’s devastating cancer diagnosis. Sadly, on June 26, Beth passed away at just 51 years old after losing her battle with cancer. Her death and subsequent memorial services were featured in the series. 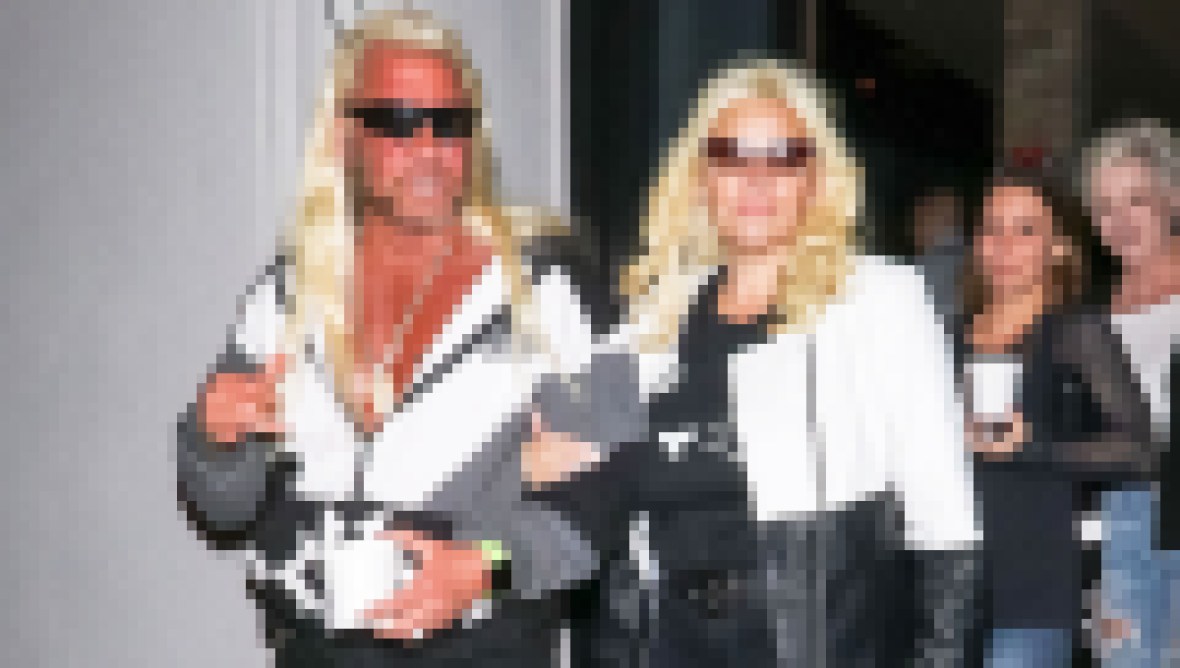 Since Beth’s death, Duane has worked hard to move on without her. He told In Touch exclusively in August that when her family misses her, they can watch her reality show to remember her. “I’m sure we’re not going to have it runnin’ 24/7 like some freak,” he said at the time. “But if they want to see mom, they just tune in WGN America. The show speaks for her.”

To see just how much Duane has changed since his early bounty hunting days, check out our gallery below!

Duane is pictured here in Puerto Vallarta, Mexico, in June 2003.

The capture he performed there put him and his bounty hunting skills on the world’s radar.

Here he is at Rockefeller Center in April 2005.

Check out the happy couple in December 2005! The two of them shared an on-again-off-again relationship until they were married on May 20, 2006.

Duane is pictured here in Honolulu in January 2006. Hawaii is one of the places he considers home.

In July 2006, he still had the same hair and basically the same style.

At least he lost the shades for this 2007 photo!

Beth and Duane attended the Fox Reality Channel Really Awards at The Avalon Club in Hollywood in September 2008.

Just a few years later, they went to the Comedy Central Roast of Charlie Sheen in September 2011. Still the same ol’ Dog!

In June 2014, Dog may have been a little more tan, but not much else had changed.

The couple still made red carpet appearances together in July 2016.

They enjoyed a night on the town in November 2018. Sadly, less than a year later, Beth passed away.

Finally, Duane is shown here in August 2019. He had only gone less than two months without his wife by this point but seemed to be doing well considering that.

He really doesn’t look that different from the bounty hunter the world first met in 2003, does he?