Although Angelina Pivarnick and husband Chris Larangeira’s wedding was full of drama, their relationship has been smooth sailing. While they started seeing each other romantically in 2016, their romance timeline spans over a decade.

“I had known Chris for 14 years and he says the reason he never hit on me was because I always had a boyfriend,” the brunette beauty told People in 2018. “We both worked in the mall when we were younger, and he says he used to see me walk past with a different boyfriend every week.”

Angelina revealed the pair reconnected years later when Chris invited her to a party. “We started hanging out from there and we’ve been together ever since,” she told the outlet.

In January 2018, the couple got engaged after over two years as a couple. They later tied the knot at their lavish nuptials in November 2019.  Jersey Shore fans watched Angelina walk down the aisle and say “I do” to her longtime love in an episode that aired during season 3 of the reboot, Family Vacation. Sadly, viewers also saw the drama that transpired with the Staten Island native’s costars.

During Angelina and Chris’s wedding reception, Nicole “Snooki” Polizzi, Jenni “JWoww” Farley and Deena Cortese made a speech that did not go over well. After making several jokes, including calling the bride “the dump to their island,” Angelina stormed out of her own affair and the girls were booed by their wedding guests.

Since then, Angelina has been at odds with her castmates and the ladies have taken their feud to Twitter. “For months, myself, Jenni and Nicole were getting threats and her knowing how bad it was for us she continued to play the victim and make us look [like] terrible to people … and after seeing the episode and seeing her true colors … I can care less if I ever see her again in my life,” Deena tweeted on July 7. 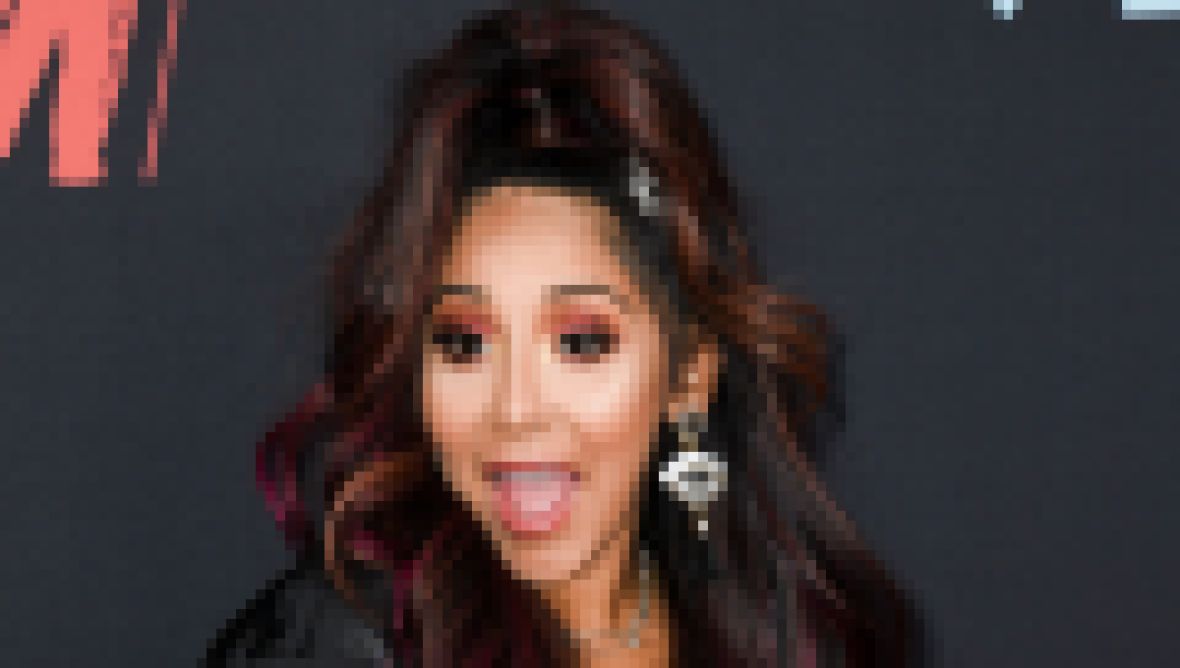 “I’ve been getting death threats since 2009 and I still get them to this day,” Angelina wrote in response. “I can’t control what people write to you or what they write to me. You are always going to have trolls commenting and saying stupid s–t. Don’t blame [me] for other people’s actions.”

It looks like Angelina’s feud with the Jersey Shore cast is far from over, but luckily, she has her man to lean on. Scroll below for a look at Angelina and Chris’s relationship timeline.

Angelina first shared a photo of her now-husband. “They can’t sit with us,” she captioned a selfie with the hunk.

Once making their Instagram debut, there was no going back. Angelina couldn’t help but gush over her man.

The pair celebrated their first Christmas together shortly after. They even sat on Santa’s lap for the special occasion.

Chris asked Angelina for her hand in marriage. “The way he proposed was soo intimate and beautiful,” the reality star revealed via Instagram at the time.

Angelina was thrilled to be engaged to her true love. “My ride or die till the end of time. My best friend. My buddy my lover,” she gushed about her husband-to-be.

Showing Him the Ropes

Since accepting his proposal, Angelina showed Chris her favorite spots, including the Jersey Shore.

She also showed him the fun life of a reality star. The couple hung out with Flavor Flav, which was definitely a night to remember.

Chris passed the ultimate test when he got the approval of Angelina’s roommates.

Thankfully, the roommates loved Chris right away. He made a great addition to the group.

Angelina and Chris made their relationship official. They looked madly in love as they said their vows in front of family and friends.

Although her costars’ wedding speech aired on MTV, viewers saw the groom comforting his beloved.

Here for Each Other

Since saying “I do,” they are stronger than ever.

In it for the Long Haul

While Angelina was upset at her friends’ insensitive wedding speech, she was relieved her man had her back.

He Keeps Her Grounded

Following her fallout with the Jersey Shore cast, she often referred to her hubby as her “rock.”

She Has His Back, Too

After fans slammed the reality star for how she reacted at her wedding, she stood up for herself and her man.

“Seeing how everyone’s downplaying our feelings is incredible and sad at the same time!! It was OUR wedding, the one day we can’t get back!!! No can tell @Chris_e_piss_e and [I] how to feel,” she wrote on her Instagram Story.

Despite the drama following their wedding, they are loving life as a married couple.

Angelina and Chris have been enjoying their summer by the shore amid the coronavirus pandemic.

As a new wife, Angelina is loving her new role and often posts photos living her best life.

We can’t wait to watch this couple grow together.