Following Glee alum Samantha Marie Ware’s allegations of on-set bullying, more of Lea Michele’s former costars are beginning to speak out. Celebrities like Yvette Nicole Brown, Alex Newell, Abigail Breslin and others who worked with the Broadway star on shows like The Mayor and Scream Queens are weighing in. But these aren’t the first allegations made against the actress famous for playing diva Rachel Berry. 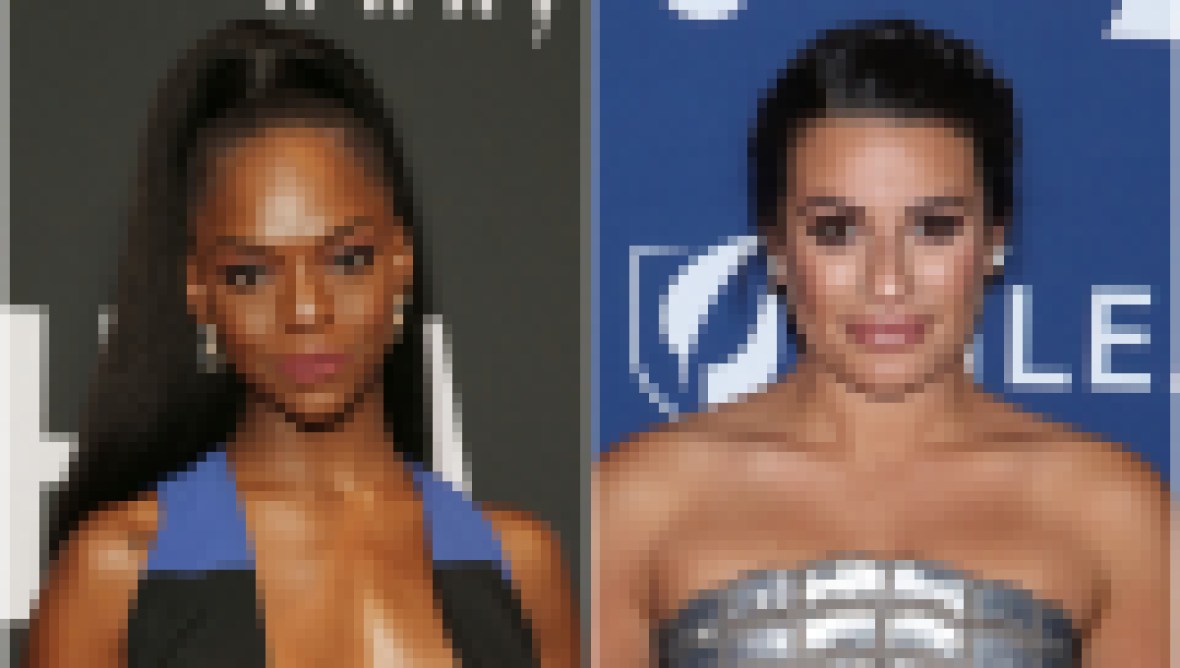 Naya Rivera, who played Santana on Glee, opened up about her contentious relationship with Lea, 33, in her 2016 book, Sorry Not Sorry. In the memoir, she discussed their on-set feud — and though she said it was blown out of proportion, it still sounds pretty rough. Though they initially got along, their “friendship started to break down” as Santana became a more central character on the show. Work tensions quickly seemed to become personal tensions, too.

“She had a hard time separating work from our outside friendship, whereas it was a lot easier for me,” Naya, 33, wrote. “Lea was a lot more sensitive, though, and it seemed like she blamed me for anything and everything that went wrong. … If I’d complained about anyone or anything, she’d assumed I was bitching about her. Soon, she started to ignore me, and eventually it got to the point where she didn’t say a word to me for all of season 6.”

Season 6 was also when Samantha, 28, joined the show. On Twitter, she called out her costar after the New Year’s Eve actress shared a message in support of the Black Lives Matter movement and George Floyd. Seemingly accusing Lea of racism, the What/If star wrote in all caps, “LMAO, remember when you made my first television gig a living hell?!?! ‘Cause I’ll never forget. I believe you told everyone that if [you] had the opportunity, you would ‘s–t in my wig!’ amongst other traumatic [microaggressions] that made me question a career in Hollywood.”

It didn’t take long for other Glee stars to show their support for Samantha, whether they had a story of their own to share or simply a GIF to show whose side they were on. Check out the gallery below to see what more of Lea’s costars had to say.

“I just didn’t want to hear Lea Michele’s name in this interview,” Craig told David Yontef on the “Behind the Velvet Rope” podcast on July 1. “At all! I think she’s a despicable, horrible human being. I think she has lost touch with reality. We were in Fiddler together. I was there when she got the call of, ‘I got Glee,’ and I think the entitlement just came over her body.”

“I honestly think it’s a distraction of the bigger issues that are going on right now. It’s kind of like, ah,” he said on FUBAR Radio’s “Access All Areas.” However, the longtime pal of Michele added, “You want to be a good, pleasant person to be around. That’s about all I’m going to say on that.”

Lea’s former Broadway costar Gerard Canonico called her out in an Instagram comment following her apology. “You were nothing but a nightmare to me and fellow understudy cast members,” the actor said of his time with her in Spring Awakening in 2007. “You made us feel like we didn’t belong there. I tried for years to be nice to you to no avail. Maybe actually apologize instead of placing the blame on how others ‘perceive’ you. You’ll probably just delete this though.”

“Did somebody say cockroaches? Because that’s what she used to refer to the background as on the set of Glee. But we grow up and we don’t stay background forever sooooo … “ Jeanté Godlock alleged on Twitter.

The dancer not only “liked” Samantha’s original tweet, but several others responding to it, including Jeanté’s and a second that claimed booksellers consider Lea a “jerk author.” A third “liked” tweet read, “Naya was always right.” Not long after, she shared her own story.

“Let me be very clear: Hate is a disease in America that we are trying to cure, so I would never wish for hate to be spread to anyone else. With that said, was she unpleasant to work with? Very much so,” she wrote. “For Lea to treat others with the disrespect that she did for as long as she did, I believe she SHOULD be called out. And yet, it’s also on us because [we allowed] it to go on for so long without speaking out, [which] is something we’re learning along with the rest of society. But, at the current moment, it’s implied that she is a racist and, although I cannot comment on her beliefs, I think we’re assuming, and you know what happens when we all assume …”

“I’m gonna say this one time … When my friends goes through something traumatic, I also go through it … That’s what friendship is,” the Glee Project alum wrote. “And if you can’t understand that, then you’re part of the problem … And that’s on PERIODT! And I mean that for both sides of this coin!” When one of Lea’s fans pointed out that he still follows her, he made a point of thanking them of reminding him to unfollow. Ouch.

“I felt every one of those capital letters,” the Community actress wrote in response to Samantha’s post. She also shared a news article about Lea losing her HelloFresh sponsorship and “liked” a tweet that simply read, “Karma is so aggressive.”

She didn’t use her words exactly, but using GIFs of herself made sure her message came through pretty clearly. In the first, she showed an image of herself raising one finger as if ready to speak. In the second, she shared an animated clip of herself looking around the room as she took a sip of her coffee. And in the third, she used one that said, “Let’s move on,” as she directed the conversation back to the Black Lives Matter movement.

Though the Scream Queens star didn’t write about her own experience, she did “like” a couple of shady tweets. “Not everyone agreeing that something felt off about Lea Michele … Where have y’all been? I’ve BEEN saying this FOR YEARS??? I thought I was alone,” read one of them. Another simply joked, “And that’s what you missed on Glee.”

When he saw Samantha’s tweet, he shared a whole bunch of eyes emojis as well as cringing emoticons. He also retweeted a fan’s response that read, “[The Mayor] was a good show that was made brilliant by @BernardDJones, and I miss it. But, if Lea Michele was a horrid, racist bully in it, then I can’t wait to support the rest of the cast in a better show without her.”

The Mayor actor shared a shady GIF in response to one of Amber’s tweets, and he also liked several tweets on the topic, including one that read, “Naya tried telling y’all!! She got so much heat for calling her out.”

Though she didn’t add her voice to the conversation, she did lend her support. She “liked” tweets from Alex, Amber and Samantha herself — including the original call-out post.

The Glee actor supported Samantha’s story with one of his own. “I remember when she yelled [at] you when she was doing a scene with Chris [Colfer]. You legit did not do anything. Her apology to you even seemed fake. I’m sorry you had to deal with that. You don’t deserve that kind of treatment,” he wrote.

“Girl, you wouldn’t let me sit at the table with the other cast members ’cause ‘I didn’t belong there,’” the Glee alum wrote. “F–k you, Lea.”

The Glee alum responded to Samantha’s tweet with a GIF of himself on the show as his character raised the roof.

The extra on the series in 2012 claimed Lea burped in her face in a “bold and rude” move on set.

“During one of the takes she walked really close to me and made this loud burp almost right in my face as she was passing by,” Imia wrote in a comment on Lea’s apology post on June 4. “She didn’t say ‘Excuse me’ or even acknowledge my presence. No eye contact, nothing. The other extras saw and a crew member as well. He reacted, ‘Wow, so sorry she did that.’”

However, a source told Us Weekly they didn’t think the singer intended to be rude. “Lea would jokingly engage in burping contests with the crew during downtime on set,” the insider claimed. “Never would she have intentionally done this directly in someone’s face.”

Imia also noted a time where Lea allegedly stepped on her foot on purpose. “After that, I just figured this is someone with terrible manners or who could care less about others around her who she feels are ‘nobodies,'” the actress said. “It was known on set that Lea kept her distance from extras and often rarely looked them in the eye.”

The actress called out Michele on her apology post as well after working on the series in 2010.

“Having worked on Glee … I will say again what a horrible experience it was watching her treat people so badly, so much disrespect,” Amber wrote. “Crew, castmates, whoever she talked to on the phone. She was the biggest diva I’ve ever experienced … and had absolutely no reason to be so hateful.”