She’s picking sides. Blac Chyna’s mom, Tokyo Toni, (real name: Shalana Jones-Hunter), admitted to TMZ that Rob Kardashian should temporarily have custody of his daughter, Dream, since Chyna has been having a tough time lately.

“I don’t know if [he] should keep them, but I do believe that [he should get custody for] a little while ‘til she pulls her thing together,” Tokyo said. “It’s clear, very clear — it doesn’t take a rocket scientist to see — something is terribly wrong.”

Tokyo, 47, also added that it’s common for children to live with their fathers. “I don’t think nothing is wrong with children going with their dad to their mothers to get, you know, better,” she said. “It happens in every day homes out here in America. It just happens.” 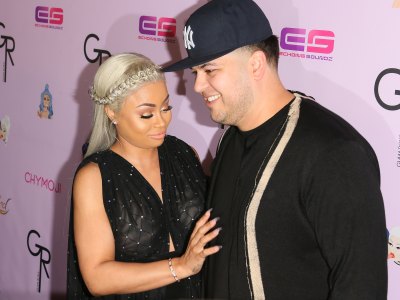 It seems like Chyna is not in the right mindset these days. In case you missed it, cops were called to the model’s house after a 911 caller claimed that she had neglected her daughter while she was drunk. Once the police spoke with Chyna, they determined that her two kids were not in any danger.

Tokyo and Chyna have had a rocky relationship for a while. In October 2018, the Dominican Republic native resorted to asking the KUWTK star, 31, if she could see her granddaughter.

Tokyo asked if there is “any way possible” that she could see Dream “through FaceTime or a video to my DM.” She added, “I don’t even know how the baby sounds. It’s absolutely ludicrous. This is the only way I can get through to you. I don’t have any numbers for anybody anymore.”

In July 2018, Tokyo even reached out to Chyna’s BFF Amber Rose on Instagram and begged for help. “You are the only person that I know that knows my daughter who does not fear her. Can you do me a favor if it’s anywhere deep in your heart can you please tell her I said let me see those kids!” she wrote.

Welp, we hope that everything is worked out sooner than later.

Is Every Duggar Ridiculously Messy? See the 'Counting On' Kids' Houses

How Scott Disick Feels After Kourtney and Travis' Wedding: 'It Hurts'

Why Rob Kardashian Skipped Kourtney and Travis' Wedding in Italy

Amy Duggar Is ‘Thankful’ to Have Jill Amid Their Family's Tension

Amy Duggar Offers to Take in Anna Amid Josh Sentencing: 'We Have Room'